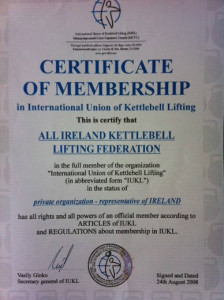 The AIKLF is recognised as a national governing body by the IUKL for all aspects of Kettlebell sport in Ireland, including its disciplines and events. The AIKLF has a leadership structure that is democratically elected by the membership. The organisation has been established since 24th Aug 2008. The promotion of Kettlebell sport is the core and primary objective of the organisation.

The AIKLF aspires to achieving a community of Girevoy athletes whose common goal will be to learn, compete and inspire. Bringing together, under the one umbrella, the kettlebell lifting clubs of Ireland so that our sport can grow and prosper.

The hope for this organisation is that it does exist and will continue to exist for those members and their clubs so that the promotion of this sport and benefits from this sport will be enjoyed by the many and not the few. It is a new sport (in Ireland) but a growing one; especially in this country where clubs are continuing to be established. Ireland has already produced some great lifters who are competing on the world and European stage and competing with honour. It is the hope of this organisation and with the help of this organisation, that this will continue for some time and indeed that they will excel even further.

The AIKLF will endeavour to hold this creed to the forefront of all its policy making decisions. We as an organisation are proud to represent any and all lifters in their journey to have this sport rightfully take its place amongst the elite sports.